Login
Not yet a member? Register Here
or
Login with facebook
X Search for another school
Skalooza > Utah > Ogden High School > Memorials > Jaynae Wintle Shaw
Back to the memorial list 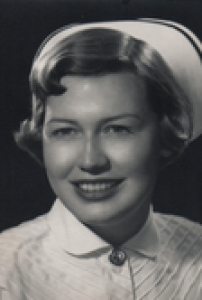 Ogden - Jaynae Wintle Shaw died on July 14, 2011 surrounded by her loving family. She was born January 6, 1931 in Ogden, the only daughter of John Rex and Phyllis Longstroth Wintle.

Jaynae graduated from Ogden High School in 1949 and the Dee School of Nursing in 1952, receiving her RN degree. She married James Ray Shaw in October 1952 and their union was blessed with one son, Gregory Kent Shaw.

Jaynae was an accomplished nurse who worked at the Thomas D. Dee Memorial Hospital and completed her nursing career as a surgical nurse for Dr. Louis Peery.

She was a dedicated wife, mother and grandmother, and her family was always her first consideration. Jaynae was a member of The Church of Jesus Christ of Latter-day Saints.

The family would like to thank those who made a difference for Jaynae, especially during these last years. She sincerely appreciated what others did for her.
There have been 0 fuzzies left so far.
Sign in if you'd like to leave a fuzzy What's a fuzzy?
A "fuzzy", in this case, is a feeling or an emotion like "I miss you", "I love you", or just "thinking of you". Fuzzies can be left every day.
Comments or Memories
Sign in if you would like to leave a comment or memory.