Login
Not yet a member? Register Here
or
Login with facebook
X Search for another school
Skalooza > Utah > Ogden High School > Memorials > LaVerne Gibby Davis
Back to the memorial list 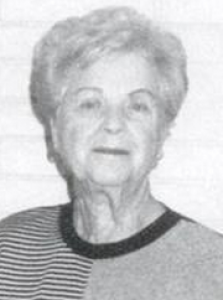 OGDEN - LaVerne Gibby Davis passed away peacefully in her sleep on Sunday, June 26, 2011 at home, surrounded by her loving family.

She was born on September 2, 1924 in Roy, Utah to Lafayette and Mary Rampton Gibby. She attended area schools and graduated from Ogden High School in 1942.

LaVerne married Lewis Delbert Davis on February 23, 1944 in Ogden, Utah and they shared many years of happiness together until his death in 2009. They lived in the Ogden area all their lives, where they reared their six children. They had 23 grandchildren and 42 great grandchildren.

She was adored by her grandchildren and great grandchildren. They looked forward to visiting her because they never left without a treat or small surprise.

LaVerne was happiest on the golf course with her many friends. Golfing was her passion and kept her young and active throughout her life. She was awarded a lifetime auxiliary membership in the Ladies Professional Golf Association for her many years of service with the Dinah Shore Golf Tournament at Mission Hills Country Club.

She was also a member of the Church of Jesus Christ of Latter-day Saints and of the Daughters of the Utah Pioneers. She was proud of her Pioneer heritage.

She was preceded in death by her husband, Lewis, sister, ValDeane Garner, a granddaughter, Trisha Davis Creer, and a great grandson, Zachery Davis.
There have been 0 fuzzies left so far.
Sign in if you'd like to leave a fuzzy What's a fuzzy?
A "fuzzy", in this case, is a feeling or an emotion like "I miss you", "I love you", or just "thinking of you". Fuzzies can be left every day.
Comments or Memories
Sign in if you would like to leave a comment or memory.